The Museum of the Ancient Orient closed to visitors for a restoration and enhancement project.

Istanbul Archaeological Museums (İstanbul Arkeoloji Müzeleri) are a compound of museums which consist three major sections; The Archaeology Museum, The Museum of the Ancient Orient, The Tiled Kiosk Museum. These three separate main units are located in the same garden and house the palace collections formed during the late 19th century by museum director, master painter ("The Tortoise Trainer" / Pera Museum) and archaeologist Osman Hamdi Bey . Istanbul Archaeological Museum, which is first regular museum appearing in the history of Ottoman Empire and in Türkiye, has about a million artifacts from a variety of cultures, brought from the imperial lands.

When Osman Hamdi Bey (Biography) was assigned as the museum director in 1881, there was a breakthrough in Turkish museology. Osman Hamdi Bey excavated in Mount Nemrud, Myrina, Kyme, other Alolia Necropolises and Lagina Hekate Temple and as a result of excavations he conducted in Sayda (Sidon) between 1887-1888, he reached the necropolis of King Sidon and returned to Istanbul with many sarcophagi, especially the famous one; Alexander the Great.

The oldest building (1472 CE) in the Istanbul Archaeological Museum complex is the Tiled Kiosk. It was built by the Ottoman Sultan Mehmed the Conqueror (Mehmed II) as a pleasure palace or kiosk and also called Glazed Kiosk (Sırça Kösk). The building itself is attributed to an unknown Persian architect since it has a typical Persian facade, polygonal pillars and stone-framed bricks. The entrance, which is decorated with mosaic tiles, has a 14 column marble arcade. The doorway of the kiosk is a single storey, while the back of the building adds another storey. The six rooms and the middle salon of the kiosk museum display plentiful examples of Turkish tiles and ceramics from the Selcuk and Ottoman periods.

The Museum of Ancient Orient

The building established as the first academy of fine arts of the Ottoman Empire and later arranged as the Museum of Ancient Orient, where the old oriental works is today, was built by Osman Hamdi Bey in 1883 as the School of Fine Arts (Sanayi-i Nefise school), namely the Academy of Fine Arts. This academy, which will form the foundation of Mimar Sinan Fine Arts University in the future, is the first fine arts school opened in the Ottoman Empire. The architect of the building is Alexander Vallaury, who will later build the Istanbul Archaeological Museums Classic building.

Upon relocation of the academy to another building in Cagaloglu in 1917, they allocated this building to the Directorate of Museums. The museum's director at that time, Halil Edhem Bey, thought that it would be more appropriate to display the works of the ancient cultures of the near east countries separately from the Greek, Roman, and Byzantine works. They enabled the building to become the Museum of Ancient Orient.

A new museum building was needed to display magnificent works such as Tomb of Iskender (Alexander Sarcophagus), Tomb of "Crying Women" (Sarcophagus of the mourning women), Lycia Tomb and Tabnit tomb, which were brought to Istanbul from Sidon King Necropolis excavation performed by Osman Hamdi Bey between 1887 and 1888. Across from The Tiled Kiosk, Istanbul Archeological Museums Classical Building, built by the famous architect Alexandre Vallaury, was opened in June 13th 1891.

The Archaeological Museum stands out as one of the rare buildings constructed as a museum in that time period in the world. It is one of the most beautiful and splendid examples of neo-classical architecture in Istanbul. The inscription in Ottoman Turkish on the pediments of the gates at the entrance of the museum says “Asar-ı Atika Müzesi” (Museum of Antiquities). The tughra on the inscription belongs to Sultan Abdulhamid II.

Complex located in Sultanahmet neighborhood, historical peninsula of Fatih district; on the Osman Hamdi Bey slope, which connecting Gülhane Park with the Topkapı Palace Museum. Istanbul Archeology Museum complex can be easily reached by walking down the slope from Topkapı Palace's first court, or by walking up the hill from the main gate of Gulhane Park (Rose Park).

Halls 1, 16, 17, 18, 19, 20 located downstairs of the Directorate of Istanbul Archaeological Museums, all the halls on the upper floor, Assos Exhibition Hall and Istanbul Neighbor Culture: Thrakia, Bithynia - Biyzantium Exhibition Halls on the ground floor of the annex building are closed for visitors. 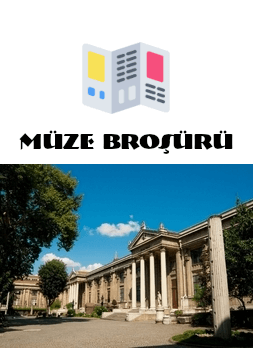 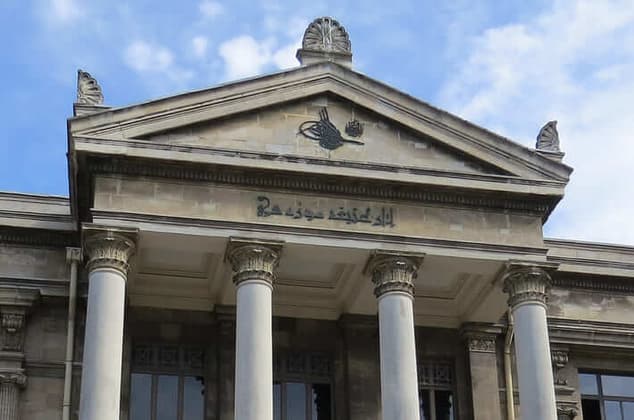 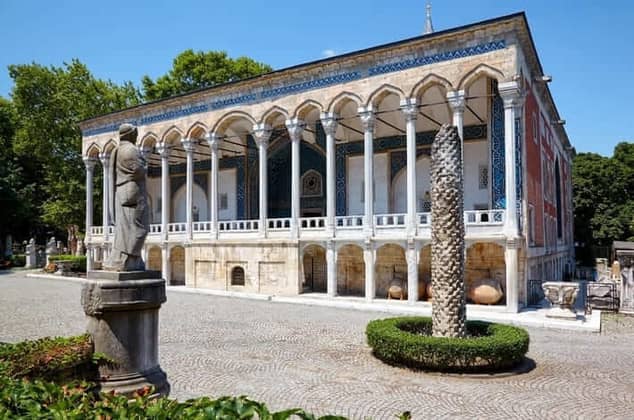 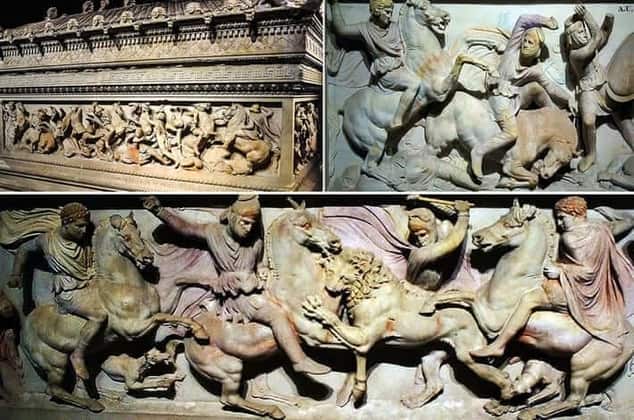 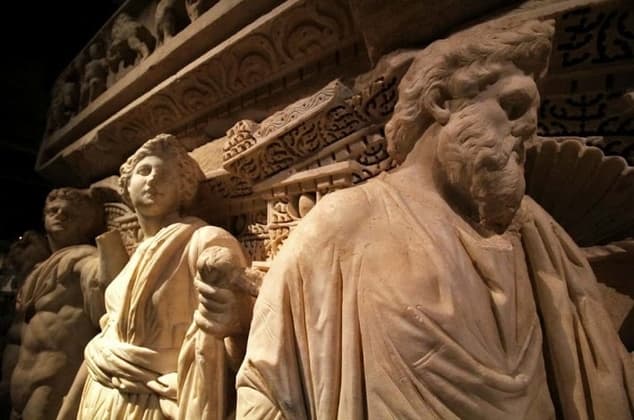 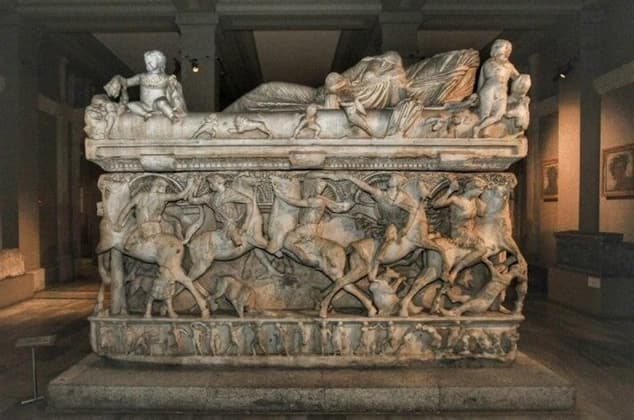 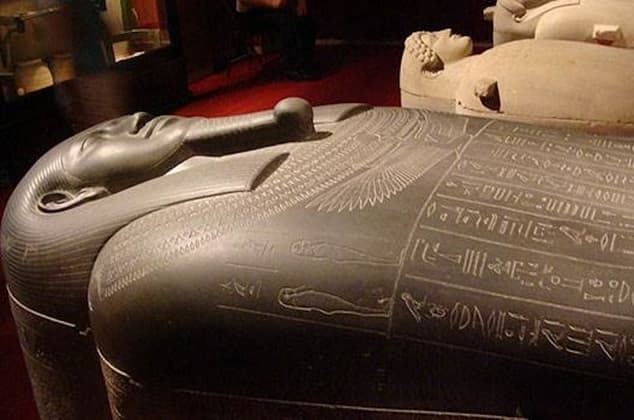 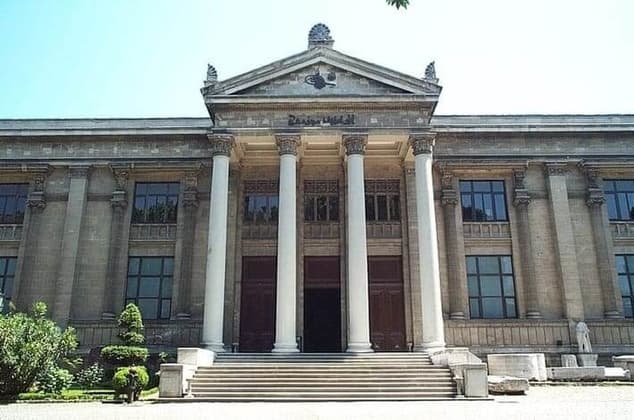